by mispriced marketsPosted on April 22, 2019

I recently sold my Questor Technology, locking in a satisfying 596% gain from my initial purchase price.

Following a close perusal of the latest year end results for Questor Technology, I decided to sell this holding and lock in the considerable gains I have made on it since first buying the stock back in November of 2015.

This was one of a handful of oil and gas service stocks that I bought in the wake of the oil price collapse. The oil and gas sector is notoriously cyclical and there is often money to be made by buying into some of the more beaten down names during one of its periodic downturns. At least this was my reasoning in late 2015 as I sifted through the wreckage of the oil bust.

I was looking for companies that had been strong operators before the bust, had the financial strength to make it through a prolonged downturn and were managing to break even, on a cash flow basis at least, even in the depths of the downturn. If they had some sort of special sauce that might let them outperform on an eventual recovery, even better.

Questor Technology seemed to fit the bill. The company had its own proprietary technology for incinerating waste gas at the wellhead and converting the heat generated into power. They had been growing quickly before the oilpatch imploded and had commanded a premium, high growth valuation. I had looked at the company when the price of oil was riding high, but the stock had been way too expensive for me to buy into at the time.

After the oil price collapse, the story was different. At the 70 c share price that I paid for this stock, I was buying into a previously high growth company with its own patented technology for around 7 times its previous peak earnings. The company came with no net debt and close to 20 c per share in cash, giving it the financial strength to weather a prolonged downturn. What’s more, recent legislation in Colorado meant that there could be strong demand for its products going forward. With the severe drop in activity in the oilpatch, profits were way down and the company was just breaking even, more or less.

With these turnaround situations, you can never be sure that what you think is a bargain basement buy will actually work out. You don’t know for sure that you are buying in at the bottom; conditions can always get worse. You don’t know how long the downturn will last or how strong the eventual recovery will be. You can’t be completely certain that a recovery will, in fact, ever materialise or, if it does, whether your chosen company will still be relevant and able to compete. Sometimes these potential turnaround situations ultimately emerge as only a pale shadow of their former selves.

Happily such was not the case with Questor. The downturn in the oil patch was definitely worse than I initially predicted. It was more brutal and went on far longer than I expected it to. The recovery has been weak and in Canada, there has barely been a recovery at all. But Questor has managed to find its way and prosper despite the serious challenges facing the industry. It pivoted from having more than 60% of its sales in Canada to a focus on the relatively more robust US market. It moved from selling incinerator units outright to  a rental model that resonated more with cost-conscious customers. The ride has not been smooth but the company has done a great job and earnings blew past their previous high water mark over a year ago.

The stock price has responded in kind. From initial purchase to final sale, I recorded a very pleasing 596% gain. Close to a 7 bagger in Peter Lynch parlance. Not bad for an honest day’s work. 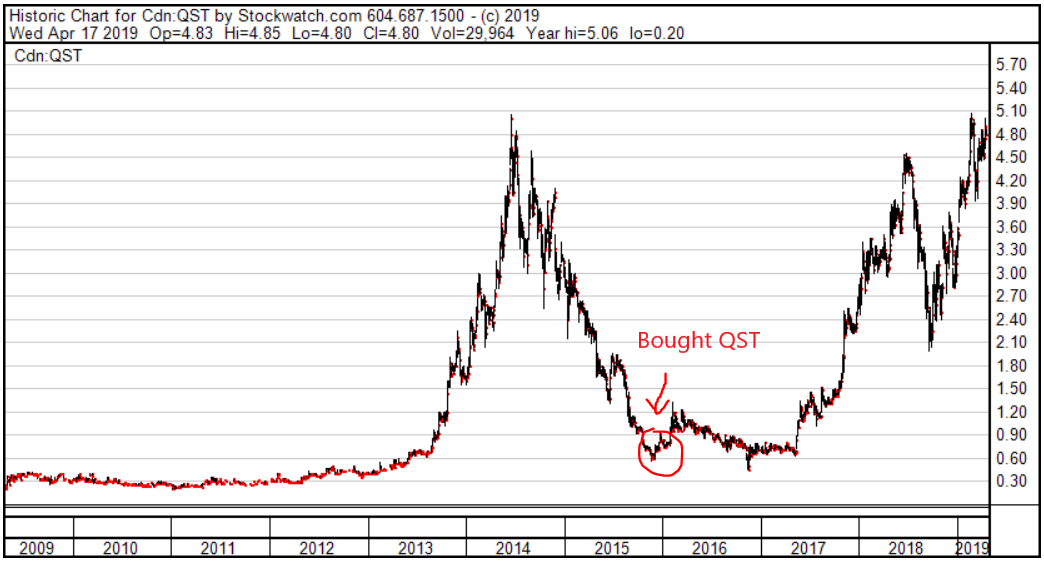 So why sell now? The future could still be bright for Questor Technology. At the current price of $4.86, the stock has a p:e of around 20 to my estimate of their adjusted trailing earnings. That is higher than the other companies in my portfolio but is not too out of line with the average p:e of the market as a whole. And if Questor continues its track record of strong growth, you could argue that this price still offers some compelling value. There are definitely some positive developments on the horizon. The company is planning on aggressively expanding its fleet of rental units in the coming year. Provided they can find customers who want to rent them, this bodes well for earnings growth. They are expanding into other markets like North Dakota and have made a significant sale to an operator in Mexico which could boost profitability further in 2019. However, to balance these plusses, there are some lingering uncertainties and it is these concerns that led me to cash in my chips now.

Ever since I bought into this story, Questor has been heavily reliant on a single, large customer for around 50% of its revenue. This has always been a bit of a black cloud hanging over the stock and merits a somewhat reduced valuation. This reliance on a single customer makes them vulnerable. In their latest annual report they warn that they expect this customer to be cutting back on their drilling activities this year in the state of Colorado but that they hope to replace this lost revenue with new clients. If they can achieve that, this will be a positive for the stock, but until they do, it is more of a headwind. As well, their proprietary incinerator technology is moving off-patent and this is another concern of mine. The company has been aggressively building out its fleet of rental units to snag “first mover advantage” but if deeper pocketed competitors move into their space now that their technology is up for grabs, this could create problems for Questor.

Probably the biggest black mark against this company, though, is their still-heavy reliance on the Colorado market for the bulk of their revenues. Here, environmental legislation mandates the use of their incinerator solutions. The company faced an existential crisis back in the fall when it looked like new proposed legislation might severely curtail drilling in the state. The proposal was voted down and the stock recovered but there is still a cloud of uncertainty around this issue. New legislation is once again working its way through the system that could significantly alter the drilling framework in Colorado.

So while there are still many exciting opportunities in front of this company there are also some significant challenges and at the current share price, I felt these were reasonably balanced. I have sold my Questor and will be looking for what will hopefully be the next 7 bagger stock to replace it.

Full Disclosure: I do not own shares in Questor Technology.