by mispriced marketsPosted on March 13, 2019

A defensive stock at a reasonable price. This new addition to the mispriced markets portfolio could benefit from the need to upgrade our aging electricity transmission infrastructure.

* This stock is listed on the Nasdaq market in the US. All prices and figures mentioned in this article are in USD. 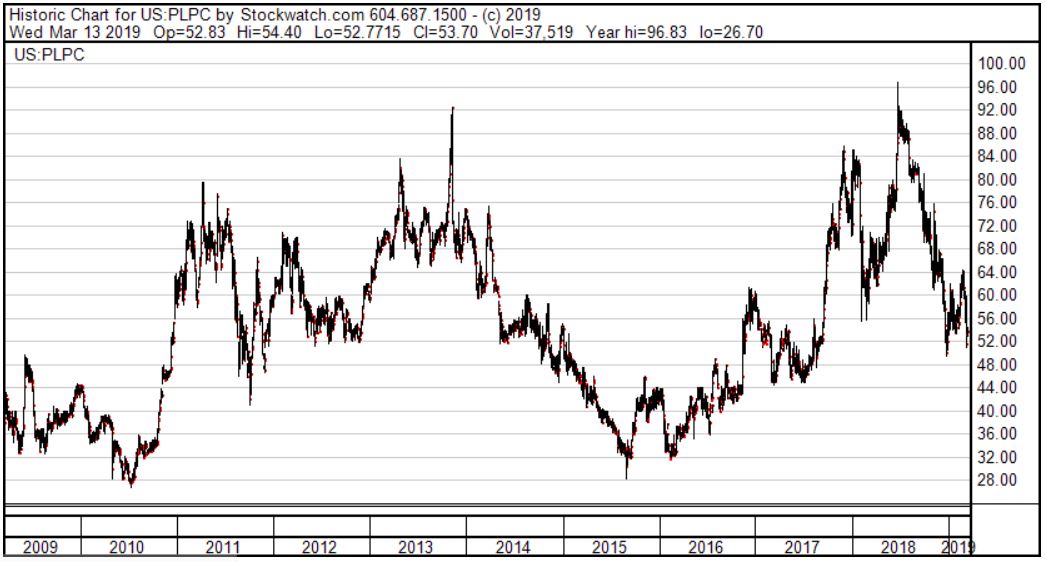 Preformed Line Products is a US-based company with a global footprint. They were the first company to introduce the concept of the twisted electrical cable for electricity transmission over 70 years ago. Their cables offered superior strength and durability and have since become the industry standard. Since then they have developed into an international designer and manufacturer of products that are used in the construction and maintenance of cable networks for the electrical transmission, telecom and solar power industries. Their offerings include connectors, signal dampeners, vibration control devices and a wide variety of similar accessory products.

40% of their sales are derived from the US market and 60% from international markets. Their international sales are spread fairly evenly across Europe, the Americas and the Asia-Pacific region. They have manufacturing facilities and sales offices in many of these foreign countries.

The bulk of their revenue (around 70%) comes from the electrical transmission industry. Another 20% derives from the telecom industry, providing such things as protective enclosures for the delivery of fiber optic cable to the home. The remaining 10% of sales are derived from a variety of industries including the solar power generation industry.

While the company’s product line of fasteners and other paraphernalia don’t sound particularly high-tech, they actually spend quite a bit every year on R&D and have a large, dedicated research facility in Ohio. In 2018, 15% of their total worldwide sales came from new products that they had developed over the past 5 years.

This company’s bread and butter is the electric transmission industry. Much of their sales in this segment come from the need for ongoing maintenance and repair of the electricity infrastructure, frequently due to storm and other weather-related damage. One of the competitive advantages they pride themselves on is the ability to respond quickly to rush orders for emergency repairs. In the emerging markets they service, they also benefit from the need for new electricity transmission infrastructure.

Both of these end uses are less affected by macro economic concerns than your typical consumer cyclical company, giving this company a defensive flavour which is welcome in the current market environment. During the last major recession in 2008, their sales and earnings stayed quite robust and they have managed to produce a profit in each of the last 15 years. However, while they are somewhat shielded from the full ravages of a major recession, they are not completely immune to external economic realities. The drop in energy prices in 2014/2015 led to a slowdown in network investment. Meanwhile, weakness in the emerging markets during this same time period led to reduced spending on new infrastructure. Both of these influences led to a drop in profitability over the last few years. However, 2018 has been much stronger and profit margins are now back to the levels the company enjoyed prior to the sudden drop in oil prices. My belief (my hope) is that the company can maintain or even improve on its current profit margins as it continues to steadily grow its worldwide operations.

Following are the sales, book value, earnings and profit margins at this company over the past 15 years. I’ve given both the basic earnings per share as reported as well as my adjusted EPS numbers. Tax rates have been all over the map the last couple of years in the US. To obtain my adjusted EPS figures, I applied a consistent tax rate of 24% to all previous pre tax earnings. I also excluded some one time acquisition gains in 2009 and a large currency exchange loss in 2015. This company does a lot of work in foreign jurisdictions that have differing tax rates. My 24% estimate is my best guess as to what the company’s average tax rate might be going forward. Finally, my profit margin numbers use my adjusted EPS figures, not the EPS as reported. 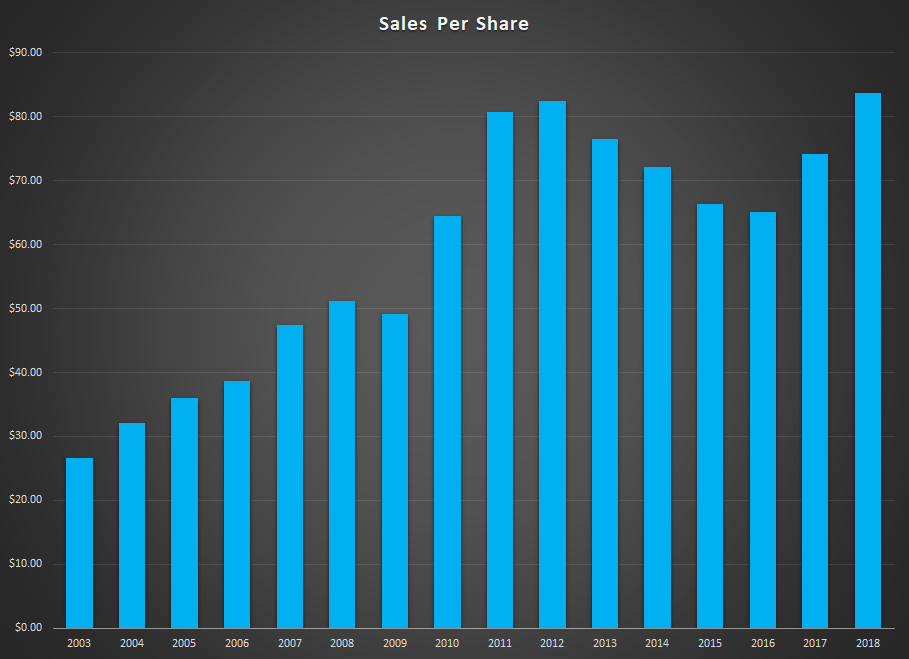 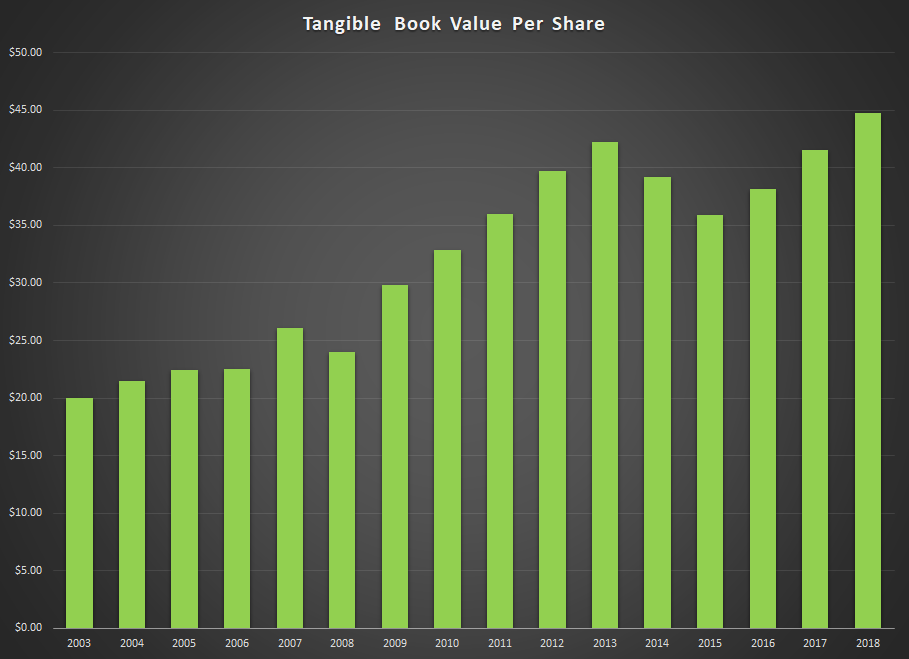 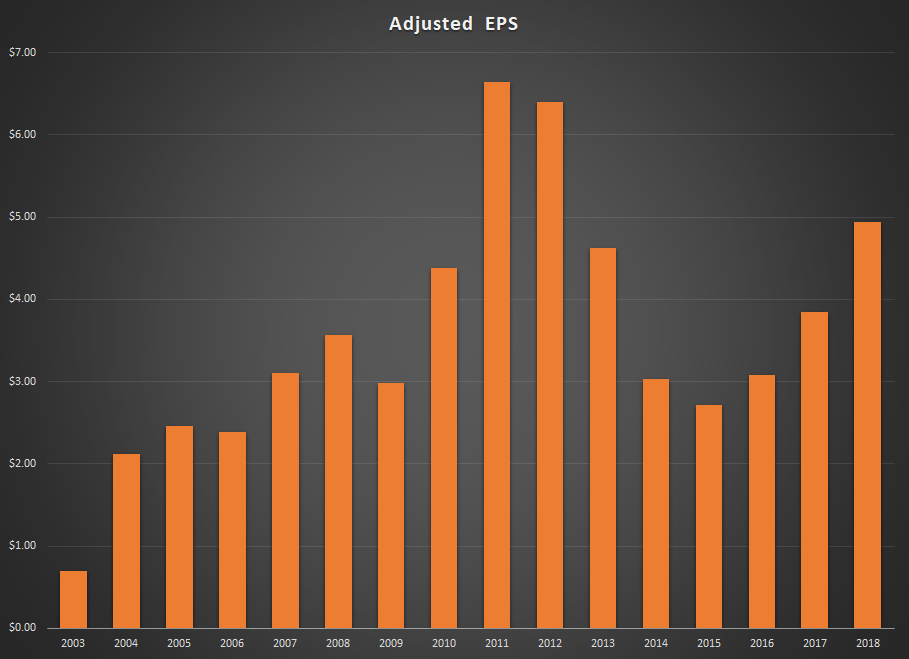 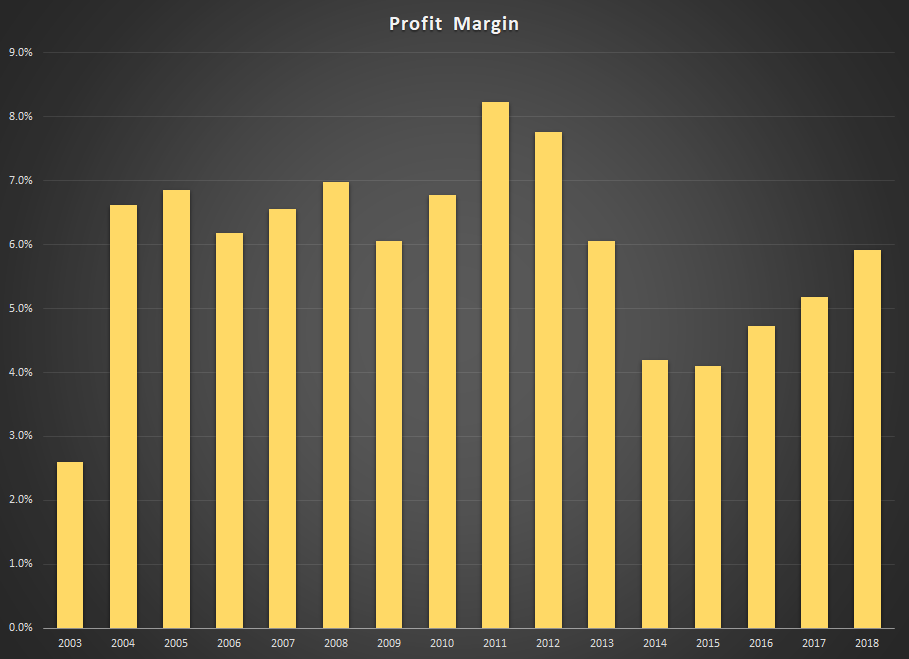 As previously mentioned, my assumption is that the stronger profit margins the company enjoyed in 2018 will persist going forward. Given the somewhat recession-resistant nature of this company’s operations and its long track record of profitability, that would mean that current earnings are a good proxy for future earnings. Using my estimate of 24% for the average tax rate going forward, this gives me EPS of $4.94 for 2018 and a trailing p:e ratio of 10.9 at the current $54 share price.

Given that the typical US small cap stock is now trading at a p:e north of 20, a p:e of 10.9 for an average growth, steady performer like Preformed Line Products looks like it offers good value for your money. In fact, if we are unlucky enough to slide into a major recession over the next few years, the defensive characteristics of this company could help to support the share price and, in my opinion, merit a premium valuation, not a heavily discounted one.

The company has paid out a consistent dividend over the past 15 years and at the current share price, the dividend yield works out to about 1.5%. Not particularly mouth-watering, but it means that the company can retain most of its earnings to re-invest and grow the business. To this end, the company recently announced the acquisition of a European substation provider which will broaden its expertise in this area of the electricity transmission market.

The company has grown its tangible book value steadily over the years. It currently sports a price to book ratio of 1.2, which is again an attractive valuation and is at the low end of its historic range of between 1.2 and 1.9.

Preformed has a strong balance sheet with net debt of less than 1 times annual earnings.

To be sure there are risks. The current surge in profitability may prove to be transient. However, even a reduction in profit margins back to the lows of 2014 and 2015 would still offer some value at these prices. The company has raised concerns about escalating raw material costs in light of the ongoing US tariffs on steel and aluminum. As well, they are nervous about the possibility of continued economic weakness in the developing markets crimping demand there. A slowdown in house building could conceivably affect the demand for last mile infrastructure (although this didn’t seem to be a problem in the aftermath of the housing crisis in 2008). And the continued transition from wireline to wireless telecom solutions (including the coming 5G roll-out) could reduce demand for some of their telecom products.

Balancing these negatives, though, is the fact that the aging electrical transmission infrastructure in the US has been neglected for too long and is in dire need of an upgrade. If electric cars take the market by storm this could exacerbate this deficit and drive significant demand for this company’s electrical products. As well, the continued development of emerging markets and their need for large scale electrical distribution and transmission could also be a robust demand driver for years to come.

With a trailing p:e ratio well under the market average, a strong balance sheet, a consistent dividend and some moderately defensive characteristics, this looks like an undervalued opportunity.

Full Disclosure: I own shares in Preformed Line Products